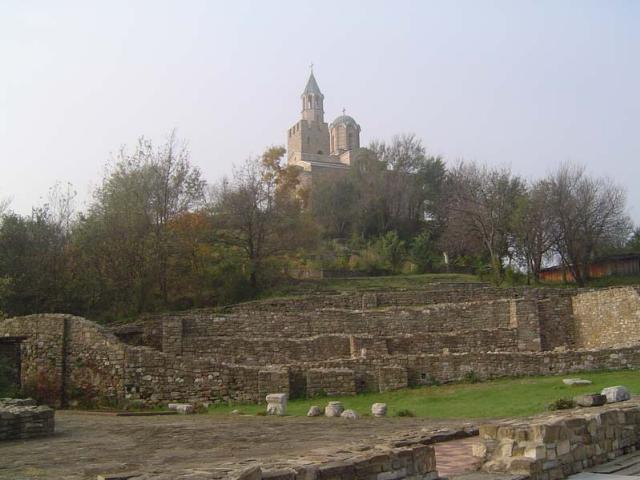 For more than 200 years Veliko Tarnovo has been the centre of the political, economic and cultural life of the medieval Bulgarian state. The city is one of the biggest in the European East according to its area and number of population.

The Royal Palace and the Patriarchate – the two major institutions at that time- were built on the Tzarevetz hill. The latter was protected by a city wall with an approximate length of 2 km and 2,60 m thick and fortified by transverse walls. The fort was accessible from three entrances. The main entrance is to the West, built on a narrow rock neck. The second one is the little (Assen's) gate. The third entrance used to link the main fortress with the Frankish quarter (the foreign merchants). In the Middle Ages Tarnovo had brisk trade with the city-republics – Genua, Venice, Dubrovnik, etc.

The third entrance was guarded by the so-called Baldwin tower. The legend tells that Emperor Baldwin of Flanders, who was taken captive by Tsar Kaloyan after the battle of Odrin 1205, was imprisoned and met his death in this tower.

The medieval town was densely built-up. During archaelogical excavations the foundations of more than 370 residential and business buildings, 22 churches and 4 monastery complexes have been uncovered. The residiential buildings formed quarters with a parish church in each of them.

The patriarchate temple Holy Ascension of Christ is situated in the middle of the complex. The tall bell tower is a rare occurrence in the church architecture on the Balkans.

Similarly to the Palace, the Patriarchate was also torn down after the conquest of the fortress in the summer of 1393 by the armies of Bayazid I.
The patriarchate church was restored and finished in 1981.

The “Holy Virgin” monastery of Arbanasi