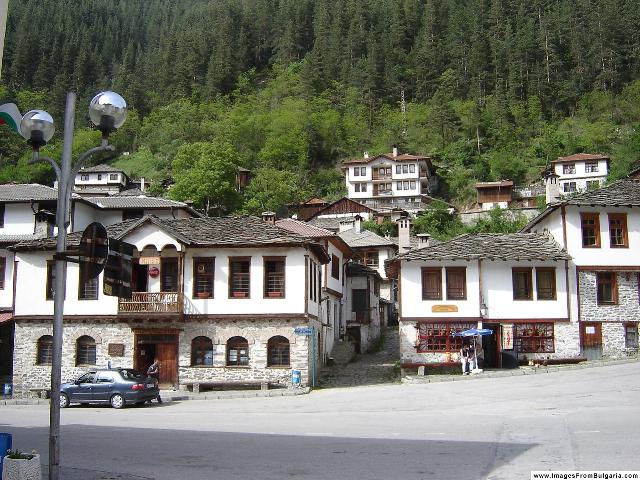 The vicinities of Shiroka Laka were inhabited only in the Middle Ages. Nearby the village of Gela in the place of Manastira (literary The Monastery) were found remains of an archeological complex – two considerable by their size churches built in V c. AC.
Remarkable are the finds discovered during the excavating of the Thracian necropolis in the vicinities of Ilindeski polyani. There were found about twenty mounds with diameter up to 6 m. The objects found on that place show that those lands were inhabited by population with high material culture.

The region of Shiroka Laka is a part of the alpine region of Bulgaria and includes the highest part of the mountain of Rhodopi, called the Perilikliyski massif. It is built of volcanic rocks. Here rises the highest peak of Rhodopi mountain – Golyam Perelik (2191m), the peak of Malak Perelik (2147m) and west of them is Orpheus peak (2188m). The terrain is rough and rugged and on some places – karst. That contributed to the formation of many caves, the biggest and the most interesting of which is the one called “Lednitsata”. Bigger rivers in the region are Shirokolashka River, Oslen, Varbovska Rivar and Karaul Dere.

The peak of Turlata has rare beauty and strongly pronounced shape, which from afar reminds a bundle of hay. It is 1822 m high and shows a great view to the south slopes of the Rhodopes hill, named Chernatitsa the small valley of Shiroka Laka. A big medieval fortress is erected on it. During the reign of King Kaloyan, together with the fortresses of Gradishte (at the foot of the peaks of Orpheus) and Vracha (in Stoykite), it plays a certain part in the protection of this Bulgarian region.

Turlata was hardly accessible fortress and was one of the best protected places in that area. Nowadays of its former grandeur, only ruins have left. One can reach the top climbing the stair-like terraces, following the ancient route to the gates of the fortress. Its south slopes are rocky, lavishly overgrown with grass, and the north ones are thickly covered by alder forests.

In the skirts of Shilesta Chuka Peak, called nowadays Orpheus (2188m), at an altitude of 1538m is located the famous Rhodope cave named Lednitsata. It is more than 1400m long and fifth deepest in Bulgaria. To reach to the bottom it’s necessary to surmount about 46 waterfalls. At the bottom of the cave passes an underground river with a debit of about 360 littres per second.

Lednitsata has a measureless natural beauty, created by the water during million of years.
Here one can see all kinds of cave shapes that provoke rapture in a visitor.

About 1 km away from Shiroka Laka erects a beautiful rock, 6 m high called by the local inhabitants Momata (literary The Maid). Seen from a distance it looks like a graceful girl holding a distaff in her hand. The shaping of the Momata is connected with the erosion of the rocks and the action of the external earth powers.