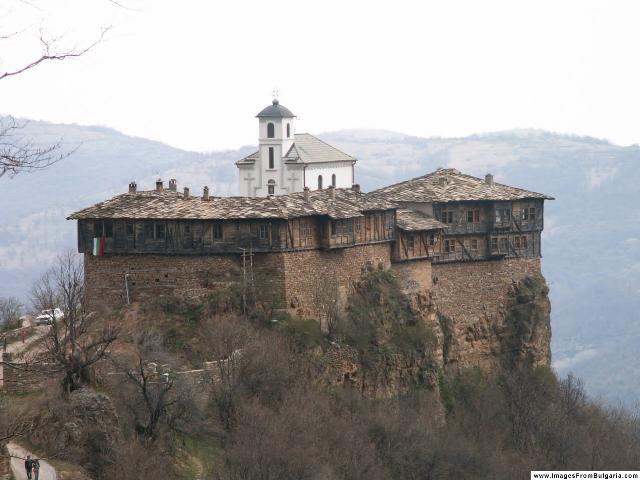 The “St. George the Victorious” monastery in Glozhene is situated in the northern part of Stara Planina near the village of Malak Izvor, not far from the town of Yablanitsa. Built in 13th c., it is one of our most original monasteries. It is named after the Prince Glozh of Kiev, who helped Ivan Asen II to regain his throne. As the legend goes, the icon of St. George the Victorious, painted by Greek monks, disappeared from the Kiev Pechersk Lavra and appeared under Mount Kamen Lisets, where the monastery was originally built. Prince Glozh also helped Ivan Asen II in the battle of Klokotnitsa in 1230. When his armies came back to hold a service near the Beli Vit River, they found out in the church of the monastery that the icon had disappeared again.

They found it overgrown with grass on the rock over the monastery. Then prince Glozh started to build another monastery on the high rock. The miraculous icon has been preserved to date in the newer monastery, which had been constructed for decades and it resembles an impregnable fortress. Even the Turks were unable to conquer it. The tunnel, which used to connect the two monasteries for a while, was used by Vasil Levski to escape from the Turks.