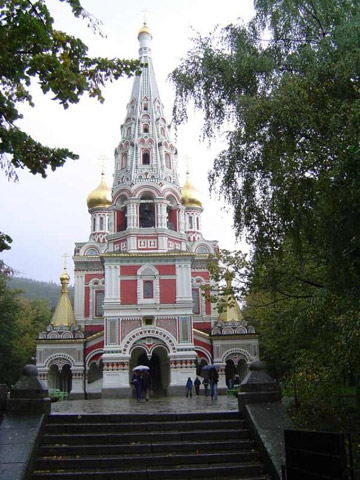 Rising majestically by the town of Shipka in the southern foot of Stara Planina, it is one of the most cherished sanctuaries for the Bulgarian people. It is a genuine pantheon of immortality that has preserved the memory of the self-sacrifice of the Russian soldiers and the Bulgarian volunteers, who died for the Bulgarian liberation in the Russian-Turkish war (1877-1878).

The idea of building a temple-monument to the heroes who had died for the religious faith, the king and the Bulgarian liberation emerged in the circle of eminent Russian people, who sympathised with the Bulgarian cause of liberation and took immediate part in the war. On 25th April 1880 the decision by the Russian emperor Alexander ?? appeared for setting up a “Committee for building an Orthodox temple in the foot of the mountain in southern Bulgaria for eternal commemoration of the soldiers who died in the war of 1877-1878”. More than 300 000 roubles and many donations were raised in the safe of the Committee. By suggestion of Count Ignatiev it was decided that the name of the temple would be “Rozhdestvo Hristovo (Birth of Christ)”, as the last great battle was in the days of Christmas.

The announced competition ended with awarding the first premium to academician Tomishko. The preparation for building the temple according to his design began in 1885, but the real construction continued after an almost ten-year suspension. On 2 July 1934 the Russian state granted the temple to the Bulgarian people.

The temple is an indisputable masterpiece of the architectural and building art. It was built in the style of the Russian churches of 18 c. the church has 5 domes – four lateral, 33 m tall, and a central one, 42 m tall, all built in the traditional for the Russian architecture form of a bulb and gilded. The central entrance to the temple is from the western façade, where a majestic bell tower rises at a height of 45 m. The temple has 17 bells, decorated with a number of ornaments, inscriptions and relief images. All together they weigh 20 tons. Ten metal crosses plated with copper and gilded rise over the domes. The multicolour composition, the whitestone details on a redbrick wall background, the relief friezes portraying stylised plants and birds render it the presence of a fabulous castle.

There is an impressive monumental iconostasis inside the temple, carved from lime-tree wood. The icons on it are 83 and are chiselled from dried cypress wood by monks from the Russian monastery “Saint Panteleymon” in Mount Athos. After it was finished, the iconostasis was entirely gilded.

Apart from the biblical scenes, inscribed in the central part of the temple, on the southern and northern wall there are images of Russian and Bulgarian historical persons, canonised by the Orthodox Church. The brothers Cyril and Methodius are among them.

In view of the purpose of the temple – to become a monument to the heroes from the Shipka Epopee, a crypt was built under the main level of the church. Here 34 marble memorial tombstones were mounted, on which the names of the military units and the self-sacrifices - 18491 people – are written in gold. Four stones on the western wall bear the names of the fallen 451 Bulgarian volunteers.

Interesting in the region Stara Zagora

The Neolithic dwellings in Stara Zagora

The “Guardians of Stara Zagora 1877.” monument

The Thracian tomb in Kazanlak