Top sights in Bulgaria >> The Museum of History in Pleven 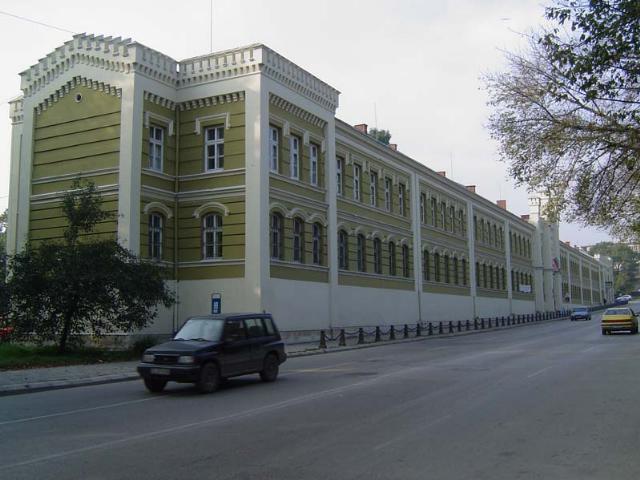 The museum is one of the best in the country. It is housed in a two-storey building, which is imposing with its size and artistic and architectural value. The museum has 24 exhibition halls with over 5000 museum values, which reveal the history, culture, flora and fauna of the town of Pleven and the Pleven region from antiquity to present day.

Here visitors can find the richest collection of exquisite flint implements (45 thousand years BC) in Europe.

A special interest is aroused by the original part of a dwelling and materials from a pre-historic settlement of the Copper and Stone Age, which have been transferred from the village of Telish and tell of a highly developed civilisation from the fifth millennium BC The artistic value of the monuments discovered in the Roman town Ulpia Escus (1-4 c.) by the village of Gigen and the late antique and early Byzantine fortress Storgosia (4-6 c.) near Pleven record the high level of building, architecture, material and spiritual culture in the antiquity. The elegant jewellery and vessels from the Nikopol treasure (13-14 c.) prove the high achievements of the Bulgarian culture from the Middle Ages.

Traditional occupations and national lifestyle and culture in 15-19 c. are shown in an original way in the museum.

In the museum there are halls that are dedicated to the National Revival. The first all-girls school was established in Pleven in 1841, and in 1869 Vasil Levski founded the First Revolutionary Committee.

The Pleven Epopee of 1877 is impressively exhibited. There are a number of uniforms, flags, weapons, personal belongings, etc. dating from the Russian-Turkish war of 1877-1878, which reveal the heroism of Russians, Bulgarian and Romanians in the epic battles and their willingness to sacrifice their lives.

The Natural Science department presents the rich variety of the flora and fauna in the Danube plain. Modern flora and fauna are represented by dozens of exhibits, including a number of species enlisted in the Red book of Bulgaria and Europe.